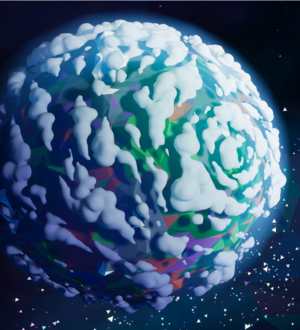 In Astroneer, each of the planets are procedurally generated with unique Resources, Types, and Collectibles of their own.

The Planets in Astroneer each have a type associated with them. Each type has varying differences, from the amount of sun to the types of resources that it may contain.

Landing Zones are locations on each planet that a player may land on using a Shuttle. Landing zones are marked with a sphere when viewed in orbit around the planet, allowing the player to select the zone to land in that location.

Landing Zones appear naturally at the start of the game, or from the use of a Landing Pad. If a Landing Pad is used in or near another landing zone, they may overlap and the player may have trouble selecting the proper zone to land in. Landing Pads do not have Beacons, so they may be hard to distinguish from naturally occurring Landing Zones. In multiplayer, a passenger is also able to select a landing zone to land on, not only the person in the main seat.