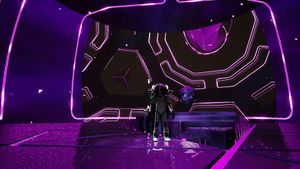 A close up of an activated Gateway Engine's Odd Stone on Sylva.

Gateway Engines are structures that make up the cores of each planet. They are spherical structures, with many pillars extending outward and up through the outer core layer of the planets. The pillars and sphere in the center use a different gravity than the planet does. When approaching any part of the engine, the player will be pulled and orientated to the surface of the structure and will be able to move normally along the surface.

As most pillars are not connected to the engine directly, the player will need to jump to be able to attach to the main central structure of the engine. There are two pillars that are connected and will easily allow the player to walk onto the main central structure. On the inner part of the main structure, there are three sides, the top and bottom, each of which will orientate the player to be able to run along to get around without issue.

When first approaching the Gateway Engine, it may be shielded if a Gateway Chamber has not been activated on the surface. Once it is open, the player may enter the central part of the engine. On one side are three raised platforms, similar to the Chambers, that will require a specific resource, marked with a symbol on top of each platform. Once the required item is provided, a Geometric Triptych will appear in the middle and the engine shield will reappear. The player must take the triptych up one of the sides to the opposite platform. In the center is a single platform with a slot for the triptych. Once it is placed, the engine will activate and reveal an Odd Stone, allowing teleporting to chambers on the surface, as well as to the satellite.

The Gateway Engines, much like the Gateway Portal satellite, provide oxygen once the player has entered the sphere that begins at the first holographic pattern that surrounds the core structure.