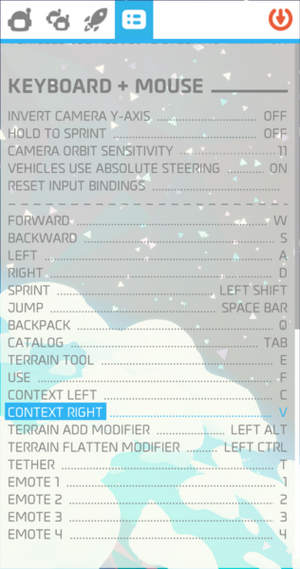 Players are able to rebind the controls they use in the game in one of two ways. The first way is by going to the ESC menu, going to the Settings tab, and scrolling down to the Controls. There players may rebind any of those keys listed.

Players can also go into the GameUserSettings.ini file and change the controls there, along with other options in the game.

For Windows 10, the file is located at: C:\Users\[NAME]\AppData\Local\Packages\SystemEraSoftworks.blah_blah\LocalState\Astro\Saved\Config\UWP\

For Steam, the file is located at: The below is the location for the *.ini file in the STEAM version of the game: C:\Users\[NAME]\AppData\Local\Astro\Saved\Config\WindowsNoEditor

For example, mouse sensitivity is:

Be aware the convention in the *.ini file is the "normal name" and its scaled negative under the same name.

Some players prefer using ESDF instead of the WASD default for movement. Here is an example of both the player and vehicles using ESDF.

Also, ensure the "UseAbsoluteSteering" is on, or true. This will cause the rover to use the "MoveRight" commands above to steer.