Oxygen is Astroneer's most vital resource, as it is the only absolute requirement for survival. If an Astroneer is without oxygen, they will begin to suffocate and eventually die if they don't reattach to a supply of oxygen in time.

The backpack has a built-in oxygen tank across the top, capable of storing up to 72 seconds worth of oxygen. Sprinting will consume Oxygen at a faster rate than walking or idling, with about 45 seconds of oxygen while sprinting. The player's current oxygen level can be monitored using the tank's blue bar that indicates oxygen level, or through the audiovisual indicators that pop up when reaching the 50% and 25% marks. When close enough, the player will automatically connect to nearby oxygen supplies to refill itself, known as tethering. 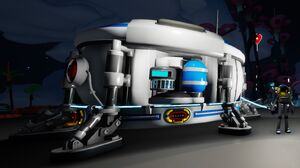 An Astroneer receiving oxygen from a habitat module.

At the start of the game, the first source of oxygen a player will encounter is from the Oxygenator, which provides oxygen at all times, as long as the player is within range. A starting Oxygenator is given to the player at the beginning of the game through the starting Landing Pad's "cargo drop". When an oxygenator is placed in the starting Shelter, or on a platform, it allows the reach of oxygen to extend further, running through any connected platforms and tethers.

When players unlock Rovers and Shuttles, it allows them to have a more mobile source of oxygen. They both provide oxygen freely at all times, however, an Oxygenator is still needed if the player wishes to tether away from them. Even with no power, vehicles will still provide oxygen, so the player does not need to worry about suffocating if the power runs out.

Tethers are the main way that players will extend further from their bases than connecting platforms and shelters will allow. They allow oxygen to be transferred down into the planet's depths, greatly increasing the range of exploration. They do not, however, provide oxygen themselves. Tethers require an oxygenator, whether attached to a platform or from a shelter, to provide oxygen to the player. When no oxygen is available, the tether line will go black.

Small Oxygen Tanks are crafted items that can be equipped to the backpack to increase the player's oxygen reserves. They essentially operate as an extension to the backpack's primary oxygen tank, emptying first when disconnected from an oxygen supply and filling last when connected. Each small oxygen tank holds 72 seconds of oxygen, the same as the built-in tank on the backpack.

Oxygen Filters are crafted items that provide a brief safety net in the event of running out of oxygen and if the player is too far from any tether line or shelter. Oxygen Filters will fill up tanks before being consumed directly for oxygen, making them a good emergency source of oxygen if the player can get to some resin before suffocating. Filters notably hold an effective eleven minutes of air, but can only be attached to the backpack for 72 seconds before being used up. Note that using the Filter On/Off method can increase a Filter's output for oxygen is not wasted while the tank is full.