Update 199 is the first update with the full added force of our new but extremely well rounded Engineering team. While the designers were busy pushing out our first experimental tests for new content, as well as making HUGE leaps forward on Modularity, Research 2.0, & Terrain 2.0 (more on that later) the engineers worked to bring Astroneer to a MUCH more stable state. These notes will contain a somewhat abbreviated list of these extensive fixes, but I want to take a second and sincerely thank everyone who took time to pack up crash reports and saves to send over to the team. They were a huge help and benefit the larger community in extremely meaningful ways. The team was able to close out dozens of bugs in the main branch of the game, as well as numerous ones discovered during our Experimental Tests. Every tweet, email, message, & post means a lot. Thank you.

Because of all this infrastructure/prototyping/stability work, we are still not delivering huge content drops. We know this might frustrate some, but if you want to read about all of the awesome stuff in the pipeline that is coming, jump down to the PROTOTYPING section of the notes. Astroneer is going to be bigger and better than we ever could have imagined, and we appreciate everyone's patience while we lay the foundation for all the content this game will be getting. Ok! Now for the notes:

The Options Menu has been completely overhauled. The Options Menu has received the first pass of a complete visual and functional overhaul, resolving several bugs with the prior implementation. This update adds lots of options including some to help people with lower end hardware. You can now:

Right now navigating and adjusting options in this menu is a little wonky, as you have to use the keyboard. Didn't want to hold it out of this update just for that reason. This menu will continue to be updated over the course of the next few releases.

The Trade Module has received some bug fixes and interaction improvements.

Beacon colors can now be changed. This longtime request has now been implemented. Beacons now serve as aids for finding a previous spot, as well as for navigation. Use the in-game UI to cycle through colors or choose the 'red strobe" option for emergencies.

Audio has been migrated to the Wwise Engine from Unreal 4 and remixed using the new technology.

Wwise audio engine integrated into Unreal 4. All audio in the game now plays through Wwise instead of UE4’s built in audio engine. The following changes and improvements have been made to the audio engine.

Each suit now has a unique Death animation. As shown off in Vlog 11, some of Gene's new death animations are now in!

In addition to numerous under-the-hood fixes which will improve your play experience, the following live issues have been fixed. Thank you to everyone in the community who has reported and shared details with us on these issues. 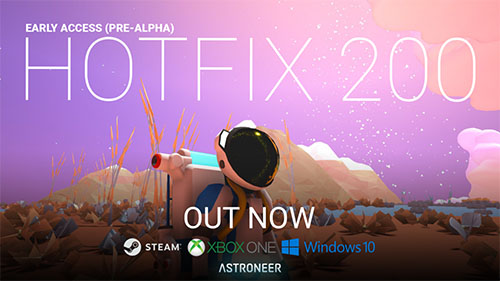