Power is a resource that is consumed by almost all systems to function, can be produced by many items and can also be found naturally and stored in stacks. 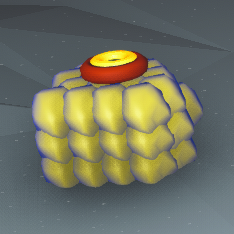 A Stack of Power

Much like Oxygen, Power is commonly found on the surface of planets, as well as inside caves, in the form of yellow deposits (outcropping from the ground) or around hazards. It was, prior to 0.4.10211.0, found in spires.

When harvested from the environment, power will stack up on the back of the deform tool which will then be transferred to the player's inventory once the stack is complete. A power stack can then be moved and placed on any storage slot and will be considered as an energy source wherever it is placed. As energy is consumed from the stack it will shrink and, once it's completely consumed, the stack will disappear.

A stack of Power can discharge at 4 Amps (twice the output of a Solar Panel) if enough demand exists, disappearing almost immediately. A full stack is exactly enough to fill both columns in a Small Battery at 1 Amp, taking 32 seconds.

Keep in mind that, while mining this resource, power will prioritize recharging your character's batteries over gathering the resource to a node. If any empty batteries exist on the backpack, no Power stacks will be created until full.