From Astroneer Wiki
(Redirected from Refined)
Jump to: navigation, search 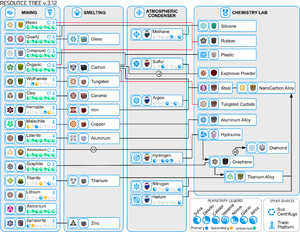 A map of resource crafting dependencies for version 1.0

Resources are the raw materials collected by Astroneers in order to create and fuel items, objects, and vehicles. Resources vary in rarity, with some occurring naturally in great quantity on a planet's surface; some appearing only on specific kinds of planets or deep below the surface; and yet others that don't occur naturally at all and must be either found as part of a discovery or traded for using a Trade Platform.

Naturally occurring resources, found in deposits on or below a planet's surface, can be excavated with tools like the Terrain Tool or Drill Head. This will break the deposits apart and collect the resource into portable items, often called "stacks." Some of these resources are harvested in an unrefined form and need to be smelted using the Smelting Furnace before they can be used, such as Laterite (which smelts into Aluminum) and Malachite (which smelts into Copper).

While using the Terrain Tool to dig out Terrain, any Canisters will be used to store the excess

Soil. By using the

Soil Centrifuge, it is possible to extract certain resources directly from canisters filled with soil. These resources include: Resin, Compound, Organic, Clay, Quartz, Graphite, and Ammonium.

Once researched and built, the

Scrap for what you need. The rarer the resource, the more scrap it costs at the Trade Platform. Scrap is a good way to obtain resources due to the abundance of salvageable items that can be put into the Medium or Large Shredders.

Discoveries such as space debris and supply drops will often yield resources and consumables, as well as lots of valuable salvageable parts.

Most resources are able to be researched in the Research Chamber for bytes. They can provide an early stream of bytes before the player finds research items that provide more bytes per second.

The following resources are found naturally on all planets:

The following natural resources are found on specific planets:

The items listed in the table below are refined using the Smelting Furnace.

This table lists the part per unit (PPU) the player may get on a planet of each atmospheric resource. A higher PPU will result in a shorter harvesting time.

The items in the table below are composite resources created in the Chemistry Lab, with some requiring an Atmospheric Resource.