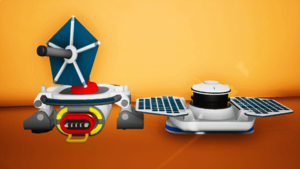 The solar panels you can craft in your Backpack (left) and on the Printer (right).

Solar panels are power production items that produce consistent power when exposed directly to sunlight. Power outputs vary depending on which solar device is being used and the planet. 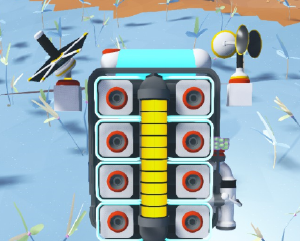 A solar panel on the left slot of the backpack, oriented toward the sun.

You can craft a small solar panel in your backpack's printer, using Copper. This kind of panel can be placed on any one slots, but in the backpack, it will only produce power when placed on one of the side slots (see image on the right).

When exposed to light, the panel will orient itself automatically toward the sun (if possible) and produce 0.5U/s of power, or enough to fill one bar on a Small Battery in 8 seconds.

You can also craft another kind of solar panel in the Small Printer module, using 1 pieces of Copper and 1 pieces of Glass. It can be placed on any T2 slot.

When exposed to sunlight, a Medium Solar Panel produces power at 2U/s, which is exactly four times as much as a Small Solar. 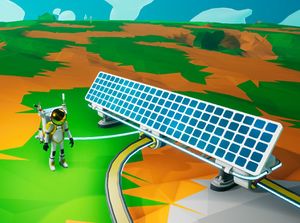 A Solar Array, plugged in and providing power. Points in the direction of the sun.

The Solar Array is the largest craft-able solar unit using the large printer. It can be crafted using 1 Copper, 1 Glass, 1 Plastic, and 1 Graphene. This is the only solar unit that acts as a platform, meaning that it must be placed on the ground. 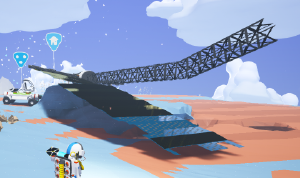 A crashed, but usable solar array.

When exploring, you can come across a large crashed solar array with a bent girder segment embedded in the surface of the ground (see image on the right).

This solar panel can be completely dug out then hauled to your base when attached to a rover or truck with a winch.

Exposed to sunlight, this array yields a minimum of 2U/s power, and increases in parabolic fashion capping at 4U/s briefly at noon if angled directly up towards the sky on the equator of the planet. Solar arrays only have panels on one side, and must be placed with the connection point facing upwards to work. Upon placing solar arrays at your base they are prone to movement. Currently, upon saving and re-entering the game solar arrays will become stationary. This is great for holding them in place, but can be a issue if not placed properly beforehand.

There is a connection point at its base which can be plugged into any platform vehicle or widget to provide power.

Interestingly, the Wrecked Solar Array's power generation is actually dynamic, and adjusts itself as the object moves through space or changes angle.

Each planet has its own Sun effectiveness, which affects the power produced by the solar panels.