From Astroneer Wiki
(Redirected from Storage)
Jump to: navigation, search

Storages are Modules which serve the sole purpose of storing items.

The Medium Storage is a Tier 2 Module that can carry up to 8 Small items just like the Backpack. Note that some modules might not function correctly when attached to the storage, such as the Small Solar Panel.

The Medium Storage Silo is a tier 2 Module that can carry up to 24 small items. It can be crafted using small printer.

The Extra Large Storage is the largest type of storage in the game. It carries up to 31 Small items. You cannot put Medium or larger items on it. 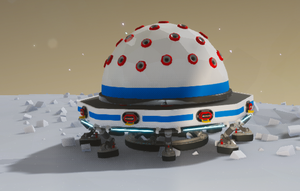 The Canister is a special tool that is used to store Soil. It is in many ways similar to a Tank, which stores Oxygen. It is reusable, and Soil will be stored or removed depending on what one is doing with the Terrain Tool. The Canister used to be required for storing Hydrazine, but now it is simply a modified Canister model that is consumed with the Hydrazine.

The Small Oxygen Tank is a compact version of the Backpack's built-in Oxygen tank. It can be attached to any slot on the Backpack, including slots on the Terrain Tool.

Batteries are one of the types of Items in Astroneer which store power. When a surplus of energy is produced, it is used to fill a battery somewhere in the network (assuming all modules' internal batteries are full). They can be filled or depleted at a maximum rate of 4 units/sec (or 1 bar/sec).