The Terrain Tool is a large two-handed terraforming and Resource-collecting tool that is standard-issue among all Astroneers. Wielding the tool will prevent an Astroneer from picking up objects directly, but it can be quickly and conveniently stowed on the Backpack at any time. The tool has three Attachment points for small Items: two on the right side and one on the top. Canisters are commonly placed directly on the Terrain Tool. 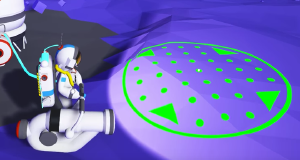 An Astroneer using the Deform Tool in Lower mode.

Astroneers can use the Terrain Tool to lower, raise, and flatten the shape of Terrain on whatever celestial body they happen to find themselves, all at the pull of a trigger.

The Terrain Tool's "Dig/Excavate" mode can be used to dig out terrain, for creating ditches, digging tunnels, and gathering Resources. All Soil gathered goes into any unfilled Canisters attached to the player's Terrain Tool or Backpack. If there is no space for soil, it will be destroyed, indicated by a burning nozzle at the back of the tool.

By engaging "Raise/Elevate" mode (Left Alt by default), the Terrain Tool expends stored Soil in order to raise the terrain. Use this function alongside level mode to create ramps and walls. Using the Elevate mode requires enough Soil from stored Canisters.

"Flatten/Level" mode (Left Ctrl by default) is used to flatten terrain to the angle of the currently-selected terrain's voxel. The Terrain Tool will take a sample of the target terrain's grade, specifically of the triangle the middle dot points at, when activated, replicating that grade over the desired area. This method is an excellent way to generate smooth ramps for large vehicles or quickly cover dangerous holes and chasms. Using the Level mode requires enough Soil from stored Canisters in order to fill in gaps, and will refill the canisters using terrain that is dug into.

Any resource nodes that are broken free of the Terrain using the Terrain Tool will be shattered into small flakes and sucked up by the Tool like a vacuum. These pieces will automatically stack on the rear port of the Tool until there are enough to form a full Resource stack. If there are no inventory slots available, the stack will drop to the ground behind the Tool.

If a different resource type is collected, the current partially-finished stack will be preserved in its own virtual inventory; it will be restored the next time you gather the same resource type again. 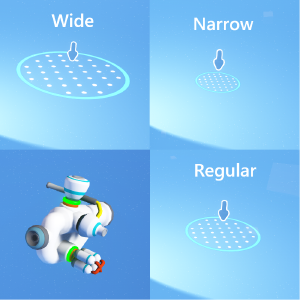 Warning: If the Wide Mod and the Narrow Mod get placed at the same time in the Terrain Tool, the one closest to the top will be the used, alongside the further away, will be deactivated