Wind Turbines is a module that generates power randomly from the wind, a useful feature is that it can generate power, even during the night when the Solar panels do not work. 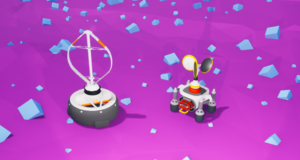 A smaller version of the Wind Turbine, the Small Wind Turbine is a widget, and a power source that can be placed on a Platform, Vehicle, or on the utility slots of an astroneer's Backpack. The Small Wind Turbine will only produce power while in windy weather, but not during sandstorm. It must be researched first, before being able to craft one

The Medium Wind Turbine is a Power source that can be placed on two adjacent slots of a Module or a Vehicle. Just like the smaller Small Wind Turbine, it generates power from the Wind, but will not generate power during a storm. Presumably this is because real life wind turbines will lock the rotors to prevent damage from spinning too fast.