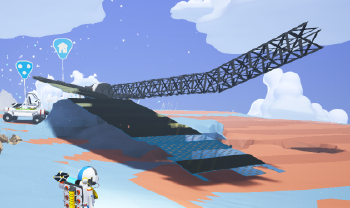 The Wrecked Solar Array is one of the Solar panels in Astroneer as well as a modular power source. It only produces energy in daylight.

When exploring, you can come across a large, crashed solar array with a bent girder segment embedded in the surface of the ground (see image on the right).

This solar panel can be completely dug out then hauled to your base when attached to a Rover or Truck with a Winch, or by simply dragging the winch by hand, which can be far easier and more accurate than maneuvering it on a Vehicle.

Exposed to sunlight, this array yields between 2U/s to 4U/s of power. The actual power production varies dynamically depending on the precise angle of sunlight relative to the panel, meaning the maximum of 4U/s is typically unachievable on the equator of a planet. Regardless of angle, if sunlight exists at all in its view angle, it will provide a minimum of 2U/s.

There is a connection point at its base. To connect the Solar Array, dig a crater the Solar Array can stand in and connect it to your base directly or by using a Rover, or Extenders. You can perform this method by using the winch.

In the most ideal circumstances, a Solar Array spawns close enough to the landing point for the Habitat that a couple of small platforms, or one or two Extender packs could be used to reach it, giving easy access to a free approximate 3U/s of power. More often though, Solar Arrays are far enough away that using more than three or four Extender packs to connect it to the base uses enough copper that two Medium Solar Panels would produce more power.

Consequently, if one can produce them, Medium Solar Panels are cheaper to construct and produce more power, due to the expense of copper needed to produce Extender packs. Winches, if one is located underground or already constructed, can lessen this distance easily.

The Wrecked Solar Array cannot be crafted. It can only be found as wreckage.