From Astroneer Wiki
(Redirected from Wrecks)
Jump to: navigation, search

Discoveries in Astroneer consist of a large number of different items, structures and debris randomly generated throughout the Planets. Offering a range of resources, Research Items, puzzles and side quests, they can be highly valuable during both the early and late game. A precious source of refined ores for the starting base and, apart from the rare find in very deep caves, almost exclusively the only place where to obtain the technology category Research Items.

The Gateway Fast Travel Network spans across the entire star system. To activate nodes, players must find and power Gateway Chambers across planet surfaces, each planet requiring differing amounts of power, and allowing the player to teleport to other active nodes on the same planet. After activating a chamber, the player must delve deep to the cores to find the Gateway Engine, providing resources unique to each engine to obtain a Geometric Triptych. Once a single engine has been activated, the Gateway Portal satellite appears over the sun, allowing travel between the satellite and activated Gateway Engines.

The large white cylindrical spacecraft always contains a Rover Seat and 4 resources. These are attached to a central beam within the spacecraft, accessible through a large hole in the side. The resources range from common to rare. Commonly, 1-2 Research Items are scattered around the crash site, partially buried in the ground. It broadcasts a radio signal with a barely audible morse code message.

A broken solar array can be found partially or completely buried. This one does not have attachment slots to provide power.

The Crashed Pod is small compared to other space objects, making it much harder to spot. It is a single pod with 3 attachment points inside containing resources ranging from common to rare. Commonly, 1-2 Research Items are scattered around the crash site, partially buried in the ground.

Some other variation of the satellite wrecks, this object contains a random amount of resource (somewhere between 3 and 8) and may sometimes spawn a Rover Seat.

A complete assemblage of the various Satellites found across the game. It contains 1 artifact, and 4 resources attached to a central plate in the middle of the craft. Entrance was gained from both ends to acquire all items. The satellite could not be moved even when using multiple winches, but was able to be lifted to the surface using the terrain tool. A Hydrazine Thruster was able to be attached to the interior, but did nothing even with 3 hydrazine canisters attached. These can also be destroyed with Dynamites. Screenshots are attached as reference.

Occasionally in caves, you will come across a dead explorer. Most of the time you will only see the backpack on the surface while the body is below it. The backpack always has resources ranging from common to rare. The Backpack is also likely to have Batteries, Oxygen Tanks, Fireworks and Dynamite attached to it.

The backpack had an old model, suggesting he might have died before the new backpack was made.

A complete and a partial ribcage, as well as a jaw bone containing Research Items, can all be found both above and underground.

For the full article, see Marbles.

Puzzling black and white objects with varying patterns that can be found half-buried deep in caves and very rarely on mountains in Sylva. They emit a faint glow and can be picked up and mounted on double slots. Until version 119 only a single one of the orbs, the Zebra Ball, spawned in the world. Two others had been introduced: one with a leopard pattern and another with a checkered pattern. 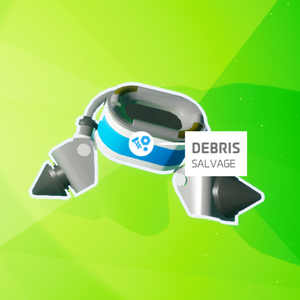 A broken Research Catalog was added before to tease its fixed counterpart's arrival.

A broken Medium Rover. This wreckage can be shredded in Extra Large Shredder.

The Historical Probes are objects designed after historic probes and satellites in the real world. They were originally in the game pre-1.0 but were removed until the Wanderer Update added them back in.